One of Ohio University’s very own will be gracing the stage at #12Fest to make sure that you’re still partying hard. Entel has been DJing at multiple venues in Ohio and has had the pleasure of opening for international artists like Paul Oakenfold, Paper Diamond, Bad Boy Bill, Gladiator, Savoy, and more. We asked him a few questions to get you better acquainted with him, and these are the results:

#Fest: Introduce yourself to anyone who may not be familiar with you.

Entel: Well, my name is Anthony Bergamesca and I am a 20 year old Audio Production student at Ohio University! I have been DJing and Producing for about 3 years now as well as playing guitar since I was 12.  I grew up listening to a lot of different styles of music but I would have to say my favorites were punk and metal music until I discovered Electronic Music. If I am not doing something music related I am most likely playing Starcraft 2 or any of the Halos. I am a closet gamer and proud of it!

#Fest: How do you describe your DJing style?

Entel: My DJjng style is spontaneous and full of energy. I love riding off the energy of the crowd and seeing what they respond to. I never know what song I am going to play next and that excites me.

#Fest: What is your craziest story while attending OU?

Entel: One saturday night me and my friends were walking back home on Court Street. Out of no where this car goes flying by us going the wrong way, followed by 3 or 4 police cars. This driver looked like he had no intentions of stopping. The driver took a left turn down a side street and thats all we saw. It was nuts to see a mini police chase happen at 2 in the morning.

#Fest: If you were stranded on an island with nothing but an iPod, what are the 5 albums you’d put on it?

Entel: In no particular order:

“Shadows are Security” - As I Lay Dying

The production on these albums speak for themselves. They have all been really influential to me and helped shaped me into the artist I am today. I want to put an emphasis on 2 by Netsky and Damage Control by Mat Zo. I think the blending of sounds and genres on both of these albums is amazing.They emphasize creative freedom and I believe that is the most important aspect of making music. If you are not making music that you truly love,then why are you making music? In my opinion these are 2 of the best albums ever released.

#Fest: Is there a specific DJ that got you into what you do now?

Entel: roeVy! While I have a different style from these guys, they are a huge influence to me.  The first time I saw them was at the Newport in Columbus and I was instantly hooked. Their show had so much energy and I instantly fell in love with their sound and style. They also had a unique appearance that separated them from a lot of other DJs in columbus. To date roeVy is still one of my favorite artists and a big influence to me.

#Fest: What’s your go-to hype song to get you pumped up?

Entel: Soldiers by Mike Hawkins! This song is HUGE and takes on a sound of its own. I recommend this tune to anyone who has not heard it yet!

#Fest: Have you ever been to a past #Fest? If so, do you have a favorite #Fest memory? What’s the wildest thing you’ve ever seen at a past #Fest?

Entel: I have been to every fest since 9Fest with the exception of Halftime! My favorite memory was watching 12th Planet at 9Fest. He is still my favorite artist to have played at a #Fest. Bass music was my first love as far as Electronic Music goes, and being able to see him live was a really awesome experience.

The wildest thing I have seen at a #Fest was the madness that Steve Aoki brought when he closed out 11Fest. Aoki is known for his high energy, party antics while on stage. It was a great set to end the day and by far the most hype I have seen a crowd at a #Fest.

#Fest: #12Fest is set to be the wildest #Fest yet. What predictions do you have for #12Fest? Do you think it will live up to the hype?

Entel: This line up speaks for itself. The talent and quality of artists involved puts this #Fest on par to be the biggest yet. I could ramble about every single artist on this line up because they are all incredibly talented. Carnage and Griz have pushed the limits of Electronic Music to help evolve the scene with their unique sounds. Wiz Khalifa, Stalley and Vic Mensa are amazing artists pushing rap to new limits. This #Fest will be the biggest yet and you don’t want to miss it!

#Fest: You get to live one day as any celebrity with any one superhero power. Who do you choose, and what superpower do you have?

Entel; Ian McKellen for sure! The Lord Of The Rings are my favorite movies. As far as super powers, I would want to be able to breathe under water like aqua man. I am fascinated by the ocean and I have always wanted to know what lies at the very bottom of the deep sea.

Catch Entel as he opens for Wiz Khalifa, Carnage, and the rest of the artists on the #12Fest bill. Tickets are still available by clicking here.

We are getting closer to #12FEST each day and everyone is starting to get more and more excited. If you are a #FEST rookie or even a veteran, here are 12 things to remember for the fest.

Besides knowing what artists are playing, get to know the music that each one makes. There is a good chance that you may find some new music that you like, causing you to get more excited for a certain act’s set.

2) DO: Bring your own alcohol.

They don’t sell it there and don’t rely on anyone else to bring any for you.

Don’t be that guy that has to chug his two Cobra’s outside the gates before he even got in because he didn’t know glass bottles weren’t allowed. Also, don’t think that hiding it in your bag will mean that you can get it inside; your bags get checked and someone will find it.

4) DON’T: Throw cans or any other objects towards the stage.

No one likes getting hit with stuff, be it cans, footballs or anything else you brought in. Just because your drunken friends think throwing a full bottle of Gatorade into the crowd is a good idea, doesn’t mean that it is. Hitting someone won’t make them happy and can ruin someone’s day. Also, throwing ANYTHING at an artist while they are on stage is extremely disrespectful, especially because they came for YOU.

5) DO: Use the green cups handed out at the gates.

This was created to keep everyone safe from thrown cans as well as assist in recycling the thousands of cans at the fest. Getting ticketed for open consumption is probably a good incentive to use them. The cups will also be a nice free souvenir.

6) DO: Support your local artists.

Students Entel & DJ LOCO are the artists representing Ohio University. Be sure to come closer to the stage during their sets as well as support them at their shows in the Athens area before and after #12FEST. There are also multiple regional Ohio acts representing Cleveland, Columbus and Dayton.

It will just cause problems for the thousands of people around you, especially those being squashed along the barricade. No one will be having a good time and too many people have a chance of getting hurt if something goes bad.

Don’t think that running into the woods will get you out of an underage drinking ticket. If you are stopped, don’t cause problems that will make things worse for you. Also, don’t try to get backstage by giving the security guard some lame excuse. If you were supposed to be backstage, you would be there already.

9) DO: Come early and stay until the end.

You’re paying for it so why not get your money’s worth? You may discover some good music you haven’t heard before.

This is probably one of the more important things to remember. The fest is long and the combination of alcohol, sweat and standing up for a long time can cause dehydration. Pack a couple bottles of water for you and your friends or buy some from the vendors. The vendors there will also have the perfect mix of drunk and festival food.

Being springtime in Ohio, you never know how the weather will be on the day of the fest or in the days prior. The ground at the fest could be a borderline mud pit, causing shoes and clothes to be covered in mud. If the weather is dry, the field will be dusty, caking everyone in dirt dust. Wearing older clothes and shoes will definitely save you money and save you the hassle of getting stains out of your favorite shirt. Also, don’t wear flip flops; you will most likely go home barefoot and upset.

Sunglasses are a necessity during the spring and summer, which is why we’re happy to announce a partnership with Rogue Eyewear! EVERY #12Fest ticket buyer is able to receive a $20 discount on all sunglasses! Here’s how to get yours:

THAT’S IT! You’ll then be able to use your coupon to get $20 off any pair of sunglasses Rogue Eyewear offers. Check out all of the sweet sunglasses they offer at http://rogue-eyewear.com/. This offer is available for all #12Fest ticket buyers, including those who have already bought their ticket, or plan on doing so up through April 12.

Vic Mensa - When A Fire Starts To Burn Freestyle 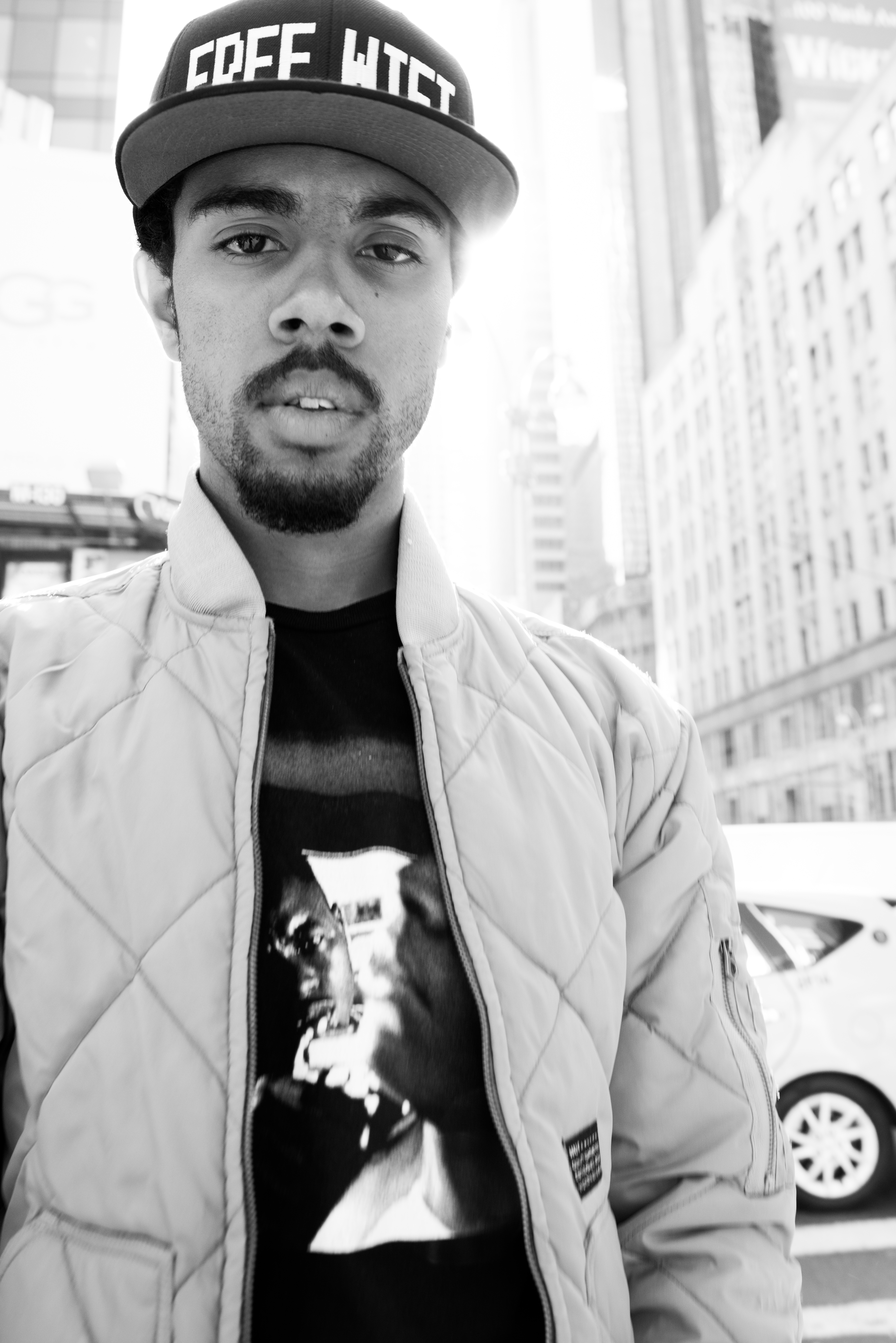 For those of you who don’t know, Vic Mensa has continued to build buzz in the Chicago rap scene ever since the release of his mixtape INNANETAPE. Vic recently went in and spit some bars over Disclosure’s “When A Fire Starts To Burn”. It’s a little bit different than what we’re used to in the underground rap scene but it makes sense since the Chicago MC is currently on tour with the electronic duo, Disclosure. Anyways, check out Vic’s freestyle below!