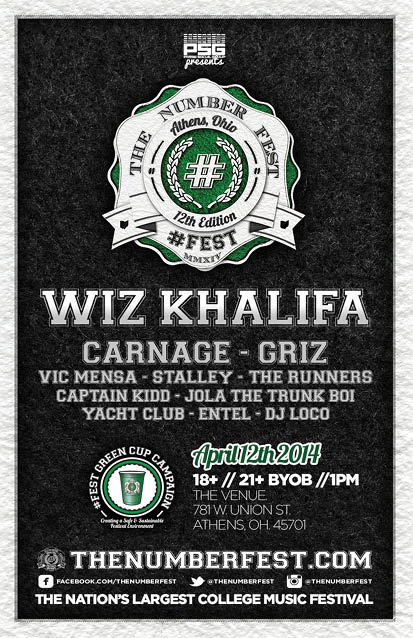 DJ and producer Carnage had a huge year in 2013, performing at nearly every major music festival all around the country. He rose to the ranks of the top-tier DJs as he became known for really getting the party going, and will blend right in with the wild atmosphere at #12Fest.
Read more...

The Green Cup Campaign is the start of a new era at #Fest. Safety, responsibility, and cooperation are aspects of the event that will always continue to evolve for the betterment of the event and all its attendees as well as the community we host #Fest in. Beginning with #Fest: 12th Edition (AKA #12Fest), we will be initiating a Green Cup Campaign which will require anyone drinking alcohol to pour their beverage into a cup instead of drinking from a can.

- Why?: To PREVENT injury, to MAINTAIN integrity, to CREATE the safest environment for our artists AND attendees, and to ASSIST in our efforts to maintain a clean environment around the venue as well as continuing to further our recycling efforts.

$20 discounted GA tickets go on sale on November 18 at noon. $35 pre-sale VIP tickets will also be available on the 18th. This is your only chance to get a $20 ticket. For #11Fest, these sold out in a few short hours. Tickets will be available on this page: http://ticketf.ly/1hQaVrk - ticket links will also be posted on the #Fest Facebook page and from the @TheNumberFest Twitter. This isn’t a matter if IF they sell out, but WHEN they sell out. Once they’re gone, they’re gone. If you’re not lucky enough to get your $20 pre-sale ticket on the 18th….

The second round of discounted pre-sale tickets for #12Fest go on sale Tuesday, November 19 at noon. This round of pre-sale tickets are only $25, for everyone who wasn’t able to get a ticket the previous day but still wants to save a few bucks. Again, these will also sell out. Tickets will be available here: http://ticketf.ly/1hQaVrk
Read more... 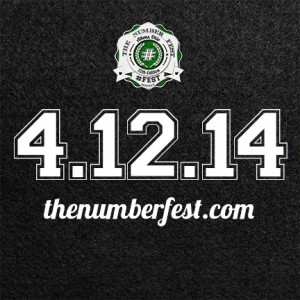 It’s official - #Fest: 12th Edition, or #12Fest, will take place on Saturday, April 12, 2014. The famous BYOB festival will once again take place at The Venue in Athens, Ohio in the spring. Lineup announcements will be made in the near future.

Discounted pre-sale tickets for the event will go on sale Monday, November 18 at noon. Pre-sale tickets for #11Fest last year sold out in under 2 hours, so make sure to set a reminder to get yours and save yourself a few bucks. Ticket links will be available via #Fest social media and on Ticketfly.com.

I’M SHMACKED TEAMS UP WITH #HALFTIME

Ohio University is about to be taken to an entirely new level with the announcement that I’m Shmacked, the college documentary tour known for their outrageous parties and crazy college videos, joins us for #Halftime on October 5.

I’m Shmacked has teamed up with upcoming DJs Fareoh and George Garcia to tour the midwest, including stops at Ohio State, Kent State and more. Originally starting as a video documentary series, I’m Shmacked has taken on a life of it’s own, depicting college life on campuses around the country. Everybody knows that when I’m Shmacked is in town, it’s going to get weird.

Fareoh, a 20-year-old DJ from New York, has enjoyed a rise in success, including touring with prodigy producer Madeon in 2012. He has accompanied I’m Shmacked for their entire fall tour, and will perform at #Halftime before The Chainsmokers, RiFF RAFF, and Hoodie Allen take the stage. Take a listen to one of his latest tracks, a remix to “Take Me Home”, below: